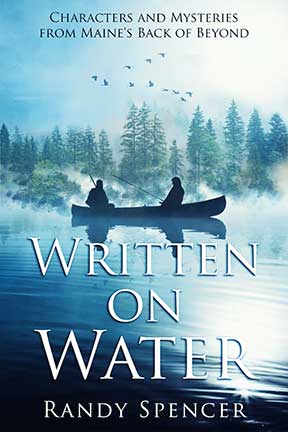 “What a treat to spend time in Randy Spencer’s guide canoe without leaving your chair. If I hadn’t met a few of his Downeast characters, I’d swear he was making them up! Just plain wonderful reading!”

“Written on Water is a delightful book that any angler or outdoorsman will enjoy. It has a much broader appeal though, as it is an endearing collection of stories from a different and refreshing kind of place. There are plenty of people who would do well to unwind by escaping, even if just vicariously, to the little general store in Grand Lake Stream to hear about its residents, their stories, and what makes the view worthwhile.”

“Humorous and poignant, these dispatches from a remote corner of Maine are a delight to read. Randy Spencer’s characters — fishing guides, junk dealers, small-town sheriffs, pot growers, boat builders and trappers, to name just a few — are as pungent as spruce sap. But Written on Water is more than a gallery of memorable Mainers — it’s a celebration of a passing way of life.”

Characters and Mysteries from Maine’s Back of Beyond

Written On Water is an extraordinary collection of tales about the part of Maine that truly is, as those who reside there call it, the “back of the beyond.” With its assemblage of quirky characters who live far off the beaten path, and consider fishing to be a sacred art, the beautiful, watery, down-east Grand Lake Stream (population 132) has been hallowed ground since the 1800s.

Written On Water takes us to a place where very old ways of life have persisted and, against all odds, the velocity of modern life has not yet invaded its shores and lakes, pines and canoes, and most importantly, its citizens.

The unlikely survival of such a place in the twenty-first century is remarkable, as is the oral history that has survived with it. Award-winning author and master Maine guide, Randy Spencer, shares this insightful collection of colorful oral histories, teeming with drama, mysteries, and laugh-out-loud moments about eccentric and lovable individuals.

In poignant and frequently hilarious prose, Spencer brings us “fish stories”—tales of the author’s experience guiding “sports” on fishing excursions—as well as stories about the quirky local residents, passed downs through generations. 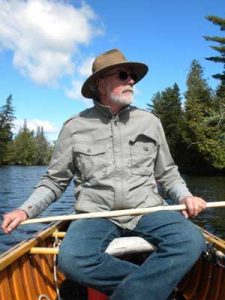 Randy Spencer guides fishermen on the Canadian border waters of Downeast Maine. He has been named one of the Ten Most Intriguing People in Maine by Portland Magazine. Yankee Magazine included him as one of the 25 people you need to meet most. He has been the subject of features on “CBS Sunday Morning,” Boston Channel 5’s “Chronicle,” The Wall Street Journal, and ESPN2.

He is the author of two award-winning books:. Where Cool Waters Flow: Four Seasons with a Master Maine Guide, which won the New England Outdoors 2010 Book of the Year award, and Wide and Deep: Tales and Recollections of a Master Maine Fishing Guide, which won the same award for 2015, Best Contemporary Nonfiction of 2015 of the New England Society in the City of New York, and National First Prize in Nonfiction from the Outdoor Writers Association of America.

Randy, his wife Shelley, and their two English Springer Spaniels, divide their time between Grand Lake Stream and Holden, Maine.

Read or Listen to an Excerpt

For the longest time, Finn had it in his head that one of the things he wanted to accomplish in life was to ride a moose. He shared this with me and others close to him, but was never rewarded with even the tiniest shred of encouragement, since none of us could even remotely see this as a good idea. Yes, a moose is horse-like in stature, but the likeness ends there. They are exceedingly retiring animals, often galled or offended by human scent or presence. To attempt to ride one, under any circumstances, would be to give deep trouble a formal invitation.

Years passed. His objective was never far from his thoughts. When an opportunity arose, he didn’t want to be caught off guard. He described one close call to me. Once, floating down Grand Lake Brook in a double-end canoe, a five hundred-pound cow moose slipped into the stream just ahead of Finn. She apparently hadn’t seen or heard him, but when he took several furious paddle strokes to catch up to her, she did. His idea was to pull up parallel to her, stand up, leap, and straddle her while she was still swimming. The problem was that the stream in that section was only fifteen feet wide. By the time he paddled up alongside the mammoth, her front hooves had already found a footing. Lurching up, she easily capsized the canoe just as Finn stood up. Luck itself was another of Finn’s quirks. His record of falling from scaffolding, trees, and roofs and walking away unscathed was legend in this town. Once again, Finn came through this test without a scratch to show for it. Nor was he thwarted from his mission. He did say that the moose, once safely up on the bank, took a moment to stare at him, which, he said, made him feel slightly embarrassed. Analyzing this incident afterward, he could see the flaws. If it happened again, it would have to be in a wider, deeper stream, or preferably in a lake.

Then, the following year—the year he was trucking rocks out to the camp where he was building the fireplace that will be there a hundred years from now—he drove up on a moose standing in the middle of the gravel road. Stalemates in this situation are common. Standoffs occur when a vehicle stops and the staring contest begins. In this period, the moose is making up its mind. That mind is reputedly housed in a walnut-sized brain, providing all the more reason for caution.

This specimen was a bull that would’ve dressed out in the 850 to 900-pound range, according to Finn. Except that it wasn’t dressed out. That would mean it was dead. This bull, with all of its organs and viscera intact, probably weighed 1100 pounds. It was September, so its antlers had reached their maximum growth, and this one had a spread of close to sixty inches. Finn knows that because, very soon, he’d have a reason for measuring the spread.

Moose antlers, especially the highly sought-after ones, have broad palms, as well as points, or tines, growing out of the palms. A set of majestic headgear like that in front of Finn’s truck can weigh up to forty pounds. The disposition of an already irritable bull carrying this kind of weight on its head should be given great heed by anyone who comes close. The organization that has been scoring these horns since 1887 is the Boone and Crockett Club, a conservation group with very strict rules. All Finn could say after this encounter was that this bull would surely have impressed Boone and Crockett.

Instead of putting his Dodge Ram truck into reverse and slowly backing away from danger, as anyone else would have done, Finn put the Dodge in forward. The moose stood its ground. Inch by inch, Finn crept closer. Finally, at about the twenty-foot mark, the bull turned its whole body toward the truck. Finn paused, then advanced another foot or so. The moose answered with a step. This was repeated several more times, until Finn was looking into the bull’s eyes through his windshield.

Then the staring contest was over. Without warning, the bull lowered his head and locked the tines of his broad antlers into the front bumper of Finn’s Ram truck, a set of horns to either side of the license plate. Then it began to rock the truck violently from side to side on its shock absorbers. This was it! The moment Finn had dreamed of. It seemed now as if the moose’s antlers were stuck in the bumper, which meant he was stationary. Finn bailed from his pickup and tried a Roy Rogers-style running side mount, swinging his prodigious lower limbs as high as he could while the moose was still rocking and rolling the truck. Here again, there was a problem Finn had failed to calculate. A fully-grown adult moose can be nearly seven feet tall at the shoulder! That’s less a high jump than a pole vault. Whether this bull was fully grown or not, it was tall enough that Finn’s attempt was bollixed, and he fell in a heap under the beast. Unharmed as usual, he was gathering himself up for another go when one side of the moose’s horns came unhooked from the bumper. In the split second that it took for Finn to think, “Uh oh,” the other side was free. Later, Finn measured the width of his truck. It was sixty inches from one end of the front bumper to the other, and these moose horns encompassed all of it.

The moose turned to see Finn on the ground beside him, and when Finn looked into his eyes, he saw his own mortality. He rolled out of the way to miss a kick from one of the bull’s hind legs, and quickly came to his feet. The moose swung its head, trying to knock Finn over with his horns, but Finn was already running. His legs might have been long, but the bull’s were too, and the bull had four of them. He quickly realized that, on the straightaway, he had no chance. By the time he picked a spot to jump over the ditch and into the thick woods, he felt the breath of the bull on his back. Finn’s sudden leap over the gulley must have flummoxed the moose, because he kept running for another fifty feet before stopping. This was Finn’s chance to sprint back to the still-running truck, all of which the bull observed without moving.

Working on his fireplace later that day, Finn was in a reflective mood. He was beginning to think that his dream of mounting a moose for the ride of a lifetime had some flaws.

A Short Interview with Randy Spencer about “Written on Water”