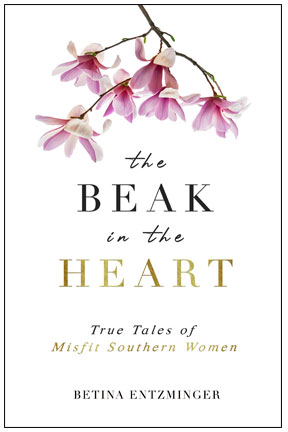 Betina Entzminger writes with searing honesty and homegrown lyricism. Line after perfect line, she tells the whole truth about a family of southern women who rebel against patriarchal constraints, hardscrabble women who support each other in order to live with authenticity and misfit integrity.  Perhaps the most enthralling story here is the author’s own—Entzminger weaves her tale of rambunctious adolescence and experimental parenthood among those of her relatives, both the living and the dead. The Beak in the Heart offers inspiration to anyone who ever struggled with family skeletons. In laying out the bones of her kinfolk, Entzminger offers us all a guide as to how we might learn from troubled heritage.

The Beak in the Heart

Vivid, dramatic portraits of the author’s “misfit” female ancestors and a candid, intimate memoir about family secrets and breaking free from the narrow confines of a “proper Southern woman.”

The Beak in the Heart is a memoir of growing up “Southern.” Betina Enzminger shares the poignant tales of women who preceded her—misfit women who defied authority and suffered the consequences in the repressive South Carolina of the nineteenth and twentieth centuries.

Entzminger links several generations of women from pre-Civil War years to the present, including Victoria, a former slave and concubine to her third great uncle, Rosalee, a great aunt committed to the state hospital for forty years, and Louise, an aunt who unwittingly married a gay man at a time when divorce was not legal in South Carolina. She also shares candid details of her rebellious youth and her own struggles with marriage and parenthood.

In exploring the lives of her spirited female relatives, Entzminger—their educated, rebellious, and misfit twenty-first-century descendant—restores their voices and finds inspiration in their courage and integrity.

The Beak in the Heart speaks to all women, regardless of region of birth, who have felt that society has curbed their freedoms or silenced their voices. 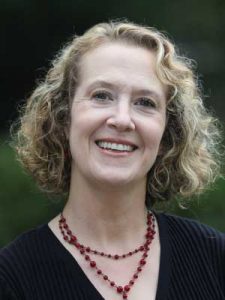 Betina Entzminger is a Southern-born writer and English professor, currently living and working in Pennsylvania. A quadruple divorcee and mother of two teenagers, Entzminger holds a Ph.D. in English from the University of North Carolina at Chapel Hill. Her academic publications include two books: The Belle Gone Bad: White Southern Women Writers and the Dark Seductress (LSU Press, 2001) and Contemporary Reconfigurations of American Literary Classics (Routledge, 2012) and many essays on American literature.

She loves travelling, gardening, southern history, genealogy, animals, and antiques.  She is also a feminist who loves men.

Read or Listen to an Excerpt

From about 9:30 in the morning until almost noon of that warm August day, I sat in the tidy, air-conditioned living room of the family genealogist; I’ll call her Rosa. In the center of one wall, a picture window dressed in white sheers and a heavy floral valance admitted filtered sunlight and a partial view of the park across the street. The other walls bore enlarged black-and-white photographs of Rosa’s parents and grandparents from the first half of the twentieth century. An oil portrait of a nineteenth-century ancestress, with lovely brunette hair and a vibrant teal dress, sat in a gold-colored frame on a side table. Rosa told me she had had this portrait made from a photograph of the original painting, which had been slashed by Sherman’s troops during the Civil War. A partial wall of open display shelves, featuring ceramic birds, dogs, and ball-gowned ladies, formed the border between the living room and dining room, and two cabinets in the dining room held delicate china and pink Depression glass, the inherited treasures of several households. The house was quiet save our voices, but the faint smell of a litter box revealed the presence of a silent, unseen cat.

I sat on a comfortable sofa; Rosa sat on a straight-backed chair pulled over from the dining table, and a low, oval coffee table stood by our knees. On the table rested a large, embossed, bone-colored Holy Bible and a copy of the maroon, hardback genealogy book that had been Rosa’s life’s work. I had asked for this meeting with Rosa in Columbia, South Carolina, in order to research the writing project I would pursue during my sabbatical from Bloomsburg University in Pennsylvania, where I taught English.

Particularly, I wanted to talk about Thomas W. Whitman (1815 -1891), a planter and slave owner reputed to have had a long-term relationship with one of his slaves, Victoria, a liaison which produced one or more children. I first learned of this ancestor and his family while reading Rosa’s genealogy. When I had spoken to Rosa on the phone, she seemed enthusiastic about the visit, suggesting I find a particular court case about our distant relative in the South Carolina Archives and mentioning a note someone had given her long ago.

“I’ll show it to you if I can lay my hands on it ahead of time,” she said in a honeyed Southern accent.

By the time of our meeting, however, something had changed.

“What is it you want to know?” she asked.

I wanted to know more about Thomas and Victoria’s relationship, about the children they shared, about how each of them felt about their union, and about Thomas’s wife. As I explained my interests again, I sensed her defensiveness.

“There’s simply no documentation to prove it. I think you’ve jumped to a wrong conclusion.” Rosa impatiently pushed back the short iron-gray hair that curled around her pale face.

“You don’t think that Victoria and Thomas had a relationship?”

“Who knows? Besides, it’s no one’s business.”

My cell phone buzzed with an unexpected call. As I reached to silence it, Rosa suspiciously asked, “Are you taping this?”

“The gold standard for research is three separate sources, such as wills, census reports, or other written records. We don’t have anything like that.”

She complained of someone sharing her research online and sharing her email address. The genealogy book she’d self-published a few years ago had begun four decades earlier as a high school project, so she was understandably possessive of its contents. After it came out, she’d gotten emails from Victoria’s descendants asking her for more information about their ancestors.

“There’s just no proof,” she said.

Here are the gold-standard, documented facts about Thomas W. Whitman. Born in 1815 in Blythewood, South Carolina, he grew up in his uncle Peter Whitman’s house, but it is not clear which of Peter’s brothers or sisters was his parent. Probably he was the illegitimate son of an unmarried sibling. Upon his death in 1855, Peter left his nephew his entire estate, “consisting of Lands, negroes, [and] Stock of Every description.” But Thomas was already a property owner before his uncle’s death. The 1850 census lists the value of Thomas’s property as nearly twice that of the landowners living near him. He also owned eighteen slaves, thirteen men and five women ranging in age from five to forty. By 1860, he had two fewer slaves, possibly due to a typhoid epidemic that had swept his property in 1856 or ’57 and made Thomas sick as well. No names are associated with these enslaved people, only tick marks next to their age and gender, so it’s impossible to know if these same sixteen had also lived on Thomas’s land ten years earlier.

We continued to talk, and Rosa gradually became more comfortable as we looked over her book together and pulled up census records on her laptop. She enjoyed the pursuit of facts and the opportunity to instruct, and she examined the figurative puzzle pieces I set before her, pointing out those that fit and those that did not. Although she was only about fifteen years my senior, she punctuated her comments to me with “baby,” or “honey,” or “child.” But as I packed up my notes and prepared to leave, she issued a frosty warning. I was not to use her name in print or quote her.

“If you do,” she said archly, “I will haunt you to your dying day.”

My parents’ house is only a block and a half from Rosa’s, and I walked back down the street feeling sticky from the humidity. My mother and father have lived in the same house for more than sixty years. It’s a brick ranch, originally with two small bedrooms and one bathroom, which they added on to the year I, the third of their four children, was born. When I was a child, a wisteria vine grew in the corner of their yard, and I loved its perfumed purple flowers. The vine is long dead, and my father has created a makeshift parking space for visitors in the corner of the yard where it used to stand. I walked through the pine needles and dried magnolia leaves that paved this spot to where my mother and father sat on the front porch.

I grew up in a quietly racist household. The N-word was not used in our home. No ancestor or currently living relative that I’m aware of belonged to the Klan or participated in racially motivated violence. Yet I learned that black and white people should lead separate lives. Gone with the Wind was aired on television yearly, and watching it together was a special event. My family’s church and my neighborhood kindergarten were completely white, except for the custodians. I never interacted with black children until I went to first grade. I remember returning from my first day and reporting with pleasant surprise that a slightly older black girl had helped me reach the monkey bars during recess.

“She was nice to me,” I told my parents.

“Don’t have too much to do with them,” my father said.

Gradually, I learned that interracial romantic liaisons were shamefully taboo. As a teenager and young adult who loved to push boundaries, that was one I didn’t cross. My father sometimes suspiciously inquired about the racial identities of boys I asked permission to go out with, but they were always white. Once I teasingly asked my mother what she would do if I wanted to date a black boy. “I’d have your head examined,” she replied.

As times have changed, my parents have had to adjust their views to accommodate a biracial great-grandchild (my great-niece), whom they love; but I, at fifty-two, am still afraid to tell them about my middle-aged, biracial boyfriend in Pennsylvania.

As we went inside to lunch, I told my mother and father about my visit with Rosa and my research in the archives from the day before.

Unlike Rosa, they didn’t seem to mind that I was asking these questions of the distant past, yet, like Rosa, they didn’t have the answers that I wanted most. Was Victoria’s relationship with Thomas consensual? How long did it last, and how many children did they have? Did it continue throughout Thomas’s two-year marriage during the Civil War? Did his wife know, and how did she feel?

“He probably slept with a lot of them,” my father offered. “Who knows how many mixed children he had?” He was implying that all white men of Thomas’s stature did this.

As I searched for satisfying answers, I encountered a frustrating, concrete blankness of which I had long been aware in the abstract: most of history is the story of white men.

A short video interview about The Beak in the Heart.